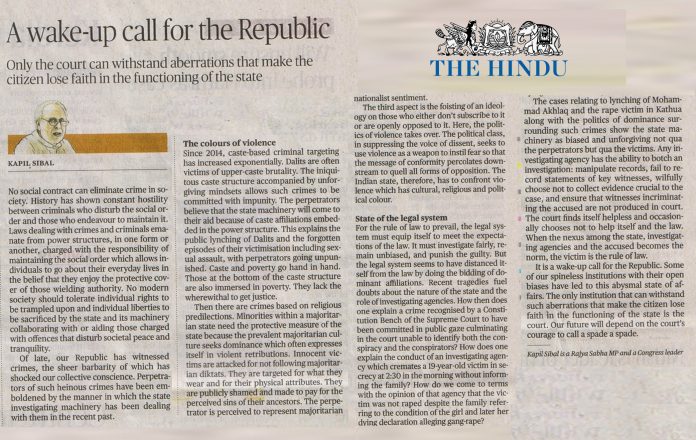 No social contract can eliminate crime in society. History has shown constant hostility between criminals who disturb the social order and those who endeavour to maintain it. Laws dealing with crimes and criminals emanate from power structures, in one form or another, charged with the responsibility of maintaining the social order which allows individuals to go about their everyday lives in the belief that they enjoy the protective cover of those wielding authority. No modern society should tolerate individual rights to be trampled upon and individual liberties to be sacrificed by the state and its machinery collaborating with or aiding those charged with offences that disturb societal peace and tranquility.

Of late, our Republic has witnessed crimes, the sheer barbarity of which has shocked our collective conscience. Perpetrators of such heinous crimes have been emboldened by the manner in which the state investigating machinery has been dealing with them in the recent past.

The colours of violence

Since 2014, caste-based criminal targeting has increased exponentially. Dalits are often victims of upper-caste brutality. The iniquitous caste structure accompanied by unforgiving mindsets allows such crimes to be committed with impunity. The perpetrators believe that the state machinery will come to their aid because of caste affiliations embedded in the power structure. This explains the public lynching of Dalits and the forgotten episodes of their victimisation including sexual assault, with perpetrators going unpunished. Caste and poverty go hand in hand. Those at the bottom of the caste structure are also immersed in poverty. They lack the wherewithal to get justice.

Then there are crimes based on religious predilections. Minorities within a majoritarian state need the protective measure of the state because the prevalent majoritarian culture seeks dominance which often expresses itself in violent retributions. Innocent victims are attacked for not following majoritarian diktats. They are targeted for what they wear and for their physical attributes. They are publicly shamed and made to pay for the perceived sins of their ancestors. The perpetrator is perceived to represent majoritarian nationalist sentiment.

The third aspect is the foisting of an ideology on those who either don’t subscribe to it or are openly opposed to it. Here, the politics of violence takes over. The political class, in suppressing the voice of dissent, seeks to use violence as a weapon to instil fear so that the message of conformity percolates downstream to quell all forms of opposition. The Indian state, therefore, has to confront violence which has cultural, religious and political colour.

State of the legal system

For the rule of law to prevail, the legal system must equip itself to meet the expectations of the law. It must investigate fairly, remain unbiased, and punish the guilty. But the legal system seems to have distanced itself from the law by doing the bidding of dominant affiliations. Recent tragedies fuel doubts about the nature of the state and the role of investigating agencies. How then does one explain a crime recognised by a Constitution Bench of the Supreme Court to have been committed in public gaze culminating in the court unable to identify both the conspiracy and the conspirators? How does one explain the conduct of an investigating agency which cremates a 19-year-old victim in secrecy at 2:30 in the morning without informing the family? How do we come to terms with the opinion of that agency that the victim was not raped despite the family referring to the condition of the girl and later her dying declaration alleging gang-rape?

The cases relating to lynching of Mohammad Akhlaq and the rape victim in Kathua along with the politics of dominance surrounding such crimes show the state machinery as biased and unforgiving not qua the perpetrators but qua the victims. Any investigating agency has the ability to botch an investigation: manipulate records, fail to record statements of key witnesses, wilfully choose not to collect evidence crucial to the case, and ensure that witnesses incriminating the accused are not produced in court. The court finds itself helpless and occasionally chooses not to help itself and the law. When the nexus among the state, investigating agencies and the accused becomes the norm, the victim is the rule of law.

It is a wake-up call for the Republic. Some of our spineless institutions with their open biases have led to this abysmal state of affairs. The only institution that can withstand such aberrations that make the citizen lose faith in the functioning of the state is the court. Our future will depend on the court’s courage to call a spade a spade.