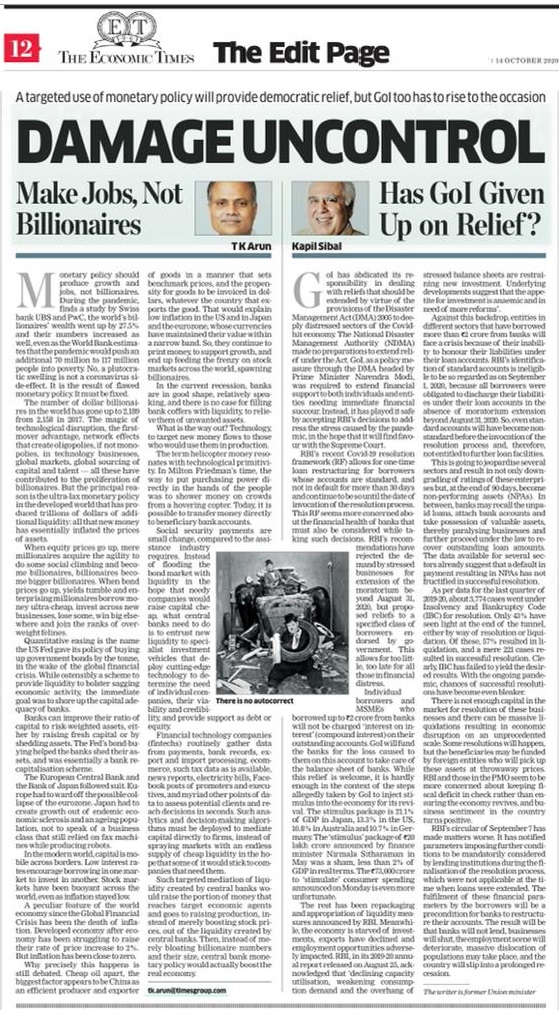 The Government has abdicated its responsibility in dealing with reliefs that should be extended by virtue of the provisions of the Disaster Management Act, 2005 to the deeply distressed sectors of the economy because of the Covid19 pandemic.The National Disaster Management Authority (NDMA) made no preparations to put in place a plan to extend relief under the Act. The Government, as a policy measure, through the Disaster Management Authority headed by the Prime Minister, was required to extend financial support to both individuals and entities needing immediate financial succour. Instead, the Government has decided to play it safe by accepting the Reserve Bank of India’s (RBI’s) decisions to address the stress caused by the pandemic in the hope that it will find favour with the Supreme Court.

The RBI’s recent Covid-19 Resolution Framework (RF) allows for one time loan restructuring for borrowers whose accounts are standard and not in default for more than 30 days and continue to be so until the date of invocation of the resolution process. This RF seems more concerned about the financial health of banks which must also be considered while taking such decisions. The latest recommendations of the RBI have rejected the demand by stressed businesses for extension of the moratorium beyond August 31 2020 but proposed reliefs to a specified class of borrowers which have been endorsed by government. This allows for too little too late for all those in financial distress. Individual borrowers and the Micro, Small and Medium Enterprises (MSME) sector who borrowed up to Rs. 2 crore from banks will not be charged “interest on interest” (compound interest) on their outstanding accounts. The government will fund the banks for the loss caused to them on this account to take care of the balance sheet of banks. While this relief is welcome, it is hardly enough in the context of the steps allegedly taken by the government to inject stimulus into the economy for its revival. The stimulus package in other countries, especially the developed world, is as large as 21.1% of GDP in Japan, 13.3% in USA, 10.8% in Australia and 10.7% in Germany. The so called stimulus package of Rs. 20 lakh crore announced by the Finance Minister in May was yet another ‘jumla’ because the real stimulus as acknowledged by renowned economists was less than 2% of the GDP.The rest was mere repackaging and appropriation of liquidity measures announced by the RBI. In the meantime the economy is starved of investments, exports have declined and employment opportunities adversely impacted. The RBI in its Annual Report for 2019-20 released on August 25, while commenting on the economic contraction itself acknowledged that “declining capacity utilisation, weakening consumption demand and the overhang of stressed balance sheets are restraining new investment. Underlying developments suggest that the appetite for investment is anaemic and in need of more reforms”.

Against this backdrop, entities in different sectors of the economy which have borrowed more than Rs.2 crore from banks will face a crisis because of their inability to honour their liabilities under their loan accounts. The RBI’s identification of standard accounts are ineligible to be so regarded as on September 1, 2020 because all borrowers were obligated to discharge their liabilities under their loan accounts in the absence of moratorium extension beyond August 31, 2020. In other words, even standard accounts will have become non-standard before the invocation of the resolution process and therefore, not entitled to further loan facilities. This is going to jeopardize several sectors of the economy and result in not only downgrading of ratings of these enterprises but at the end of 90 days become Non Performing Assets (NPAs). In between, banks may recall the unpaid loans, attach bank accounts, take possession of valuable assets thereby paralysing businesses and further proceed under the law to recover outstanding loan amounts. The data available for several sectors of the economy already suggests that a default in payment resulting in NPAs have not fructified in successful resolution. As per available data for the last quarter for FY 2019 – 2020 about 3774 cases went under IBC for resolution. Only 43% have seen light at the end of the tunnel either by way of resolution or liquidation. Out of these, 57% resulted in liquidation and a mere 221 cases resulted in successful resolution. Clearly the IBC has failed to yield the desired results. With the ongoing pandemic, chances of successful resolutions have become even bleaker.

There is not enough capital in the market for resolution of these businesses and there will consequently be massive liquidations resulting in economic disruption on an unprecedented scale. Some resolutions will happen but the beneficiaries may perhaps be funded by foreign entities who will pick up these assets at throw away prices. The RBI and those in the PMO seem to be more concerned about keeping the fiscal deficit in check rather than ensuring that the economy revives and business sentiment in the country turns positive.

The RBI’s circular of September 7, 2020 has made matters worse. It has notified parameters imposing further conditions to be mandatorily considered by lending institutions during the finalization of the resolution process, which were not applicable at the time when loans were extended. The fulfillment of these financial parameters by the borrowers will be a pre-condition for banks to restructure their accounts. The result will be that banks will not lend, businesses will shut, the employment scene will deteriorate, massive dislocation of populations may take place and the country will slip into a prolonged recession.

However, our dear Prime Minister with his saintly look gives the impression that he is far removed from the challenges facing the economy. The country deserves better.