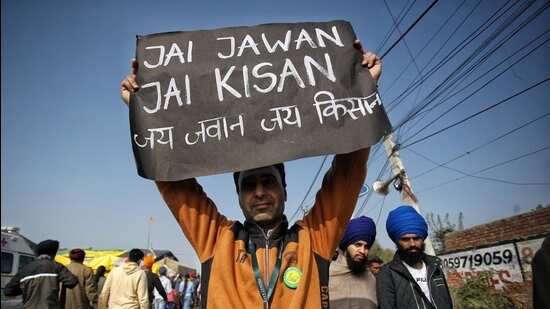 Farmers have low incomes, high debts, and go through great insecurity. The State must continue to support agriculture

The protesting farmers want to be heard. For years, governments have neglected the agricultural sector, failing to recognise the abysmal conditions under which a majority of our farmers work. The ongoing protests must be understood in the backdrop of the levels of poverty they face.

Approximately 55% of the total workforce in India was employed in agriculture and allied sectors (2011 Census). This has declined to 42.5%, according to the Periodic Labour Force Survey 2018-19. The Economic Survey 2019-20 states that the share of agriculture and allied sectors in national income has also declined to 16.5%. Though the average size of an agricultural holding was around one hectare in 2015-16, small and marginal farmers who hold less than two hectares of land constitute 86% of the total holdings. Only 1% of farmers hold more than 10 hectares of land.

The average monthly income of an agricultural household in India is estimated at about ₹6,500. It varies from approximately ₹18,000 in Punjab to ₹3,500 in Bihar. Small and marginal farming households earned less than ₹2,500 from agriculture. It is little wonder that 52% of all agricultural households in India are indebted — 64% of marginal farmers, with holdings of less than one hectare, and 18%, who hold between one to two hectares, are in debt. What this data suggests is that agriculture is not only unremunerative, but is deeply linked to levels of poverty in rural India. A National Bank for Agriculture and Rural Development (NABARD) survey also found that families of small and marginal farmers spent ₹6,750 per month on daily expenses while their incomes may have been much less.

Since farming has become unremunerative, farmers have little surplus to deal with contingencies, even in a relatively good year. In most other years, they are forced to borrow from local moneylenders to meet major expenses such as a family marriage, a medical emergency or education. This is above the regular loans they take to buy fertilisers, seeds and other inputs.

Let us look at another data point. The average outstanding loan of a farming household is just over ₹1,00,000. Most loans, which account for this debt, are from non-institutional sources at exorbitant interest rates ranging from 24% to 36%. Since the sanctioning of loans by institutions is a lengthy process, involving demand for collateral security, farmers are driven to non-institutional sources resulting in extreme indebtedness. This also explains the number of suicides by farmers — in 2019 alone, the number was 10,281.

Unlike the corporate sector, the farming community doesn’t have the clout to influence government. Industry and other sectors of the economy seek exemptions, waivers and incentives while farmers are only seeking Minimum Support Prices (MSP). Even that price doesn’t cater to their sustenance as 94% of the farmers are deprived of the benefits of MSPs. Of over 140 million farmers, only 8.7 million benefit from it. In states such as Uttar Pradesh (UP) and Karnataka, none of the farmers knew about MSPs before the sowing season, according to a NITI Aayog report. Punjab and Haryana, however, are the biggest beneficiaries. In fact, 85% of the wheat procured in India in 2019-20 came from the three states — Madhya Pradesh, Punjab and Haryana, which is why Punjab’s farmers are so concerned about their livelihood. The protesting farmers are seeking an assurance on MSPs for all crops until markets become sufficiently competitive. The government must continue with the policy of declaring MSPs of various crops well before the sowing season. Further, MSPs should be linked to inflation so that farmers know much revision will take place going forward.

While our government is keen on liberalising the agricultural sector, most governments around the world have subsidised it. The reason why previous governments have encouraged the continuation of MSPs is because procurement by Food Corporation of India (FCI) at MSPs, mostly wheat and paddy, was for distribution at subsidised prices for food security. Though farmers are given a declared price for their output, their input costs of water, power, fertiliser and seeds are subsidised. The Organisation for Economic Co-operation and Development and European Union countries, plus 12 key emerging economies, provide over $700 billion a year to support the agricultural sector. The Indian government is trying to do the reverse by not providing for a security net for the largest workforce in the country unlike the developed countries where 2% of the population or less is involved in agriculture. Prime Minister Narendra Modi’s promise of an MSP by providing the farmers the entire cost of the production plus 50% of the profit based on MS Swaminathan’s recommendations has, to date, not been honoured. The irrigation projects promised by the Bharatiya Janata Party in its 2014 manifesto have not been realised. The crop insurance scheme has turned out to be a flop and the Operation Greens project to create better storage facilities has stalled. While farmers from Punjab and Haryana along with others are protesting, sugarcane farmers from UP too have not been paid their dues. They are also ready to take this protest further.

The State needs to take notice of the disquiet within the largest workforce in this country. The Supreme Court’s advice that the laws be put on hold should be welcomed by the government. If the government chooses not to listen, this may cost it the 2024 election.