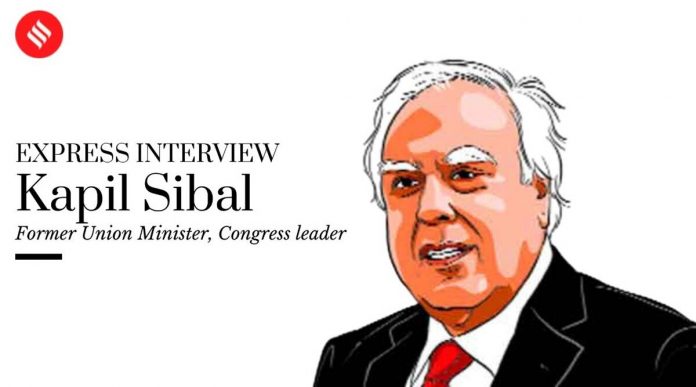 The Congress fared poorly in Bihar, even compared with the Left, as well as the recent by-elections across states. How do you see the results?

The people of the country, not just in Bihar but wherever by-elections were held, obviously don’t consider the Congress to be an effective alternative. This is one conclusion. After all, the alternative in Bihar was the RJD. We lost all the by-elections in Gujarat. Even in the Lok Sabha elections we had not won a single seat there. In some of the constituencies in Uttar Pradesh, the Congress candidates in the by-elections notched up less than 2% of the votes cast. Three of our candidates in Gujarat lost their deposits. So the writing is on the wall. A colleague of mine who is a part of the CWC made a statement the other day that ‘I hope the Congress introspects’.

If the Congress leadership knows the answers, why do you think there is a reluctance to address the issues?

There is a reluctance because the CWC is a nominated body. Democratic processes must be adopted and embraced even in the constitution of the CWC, which is reflected in the provisions of the Congress’s constitution itself. You don’t expect nominated members to start questioning and raise their concerns about the reasons for the constant decline of the Congress in elections after elections.

You and 22 other senior leaders had written to the Congress president giving a raft of suggestions. Have you heard anything from the leadership?

Since there has been no dialogue and there seems to be no effort for a dialogue by the leadership and since there is no forum to express my views, I am constrained to express them publicly. I am a Congressman and will remain a Congressman and hope and pray that the Congress provides the alternative to a power structure which has subverted all the values that the nation stands for.

Not being an effective alternative… that is a really bad situation for a party.

So where we were an alternative the people of that state have not reposed their confidence in the Congress in the manner expected by us. So the time for introspection is over. We know the answers. The Congress must be brave and willing to recognise them.

Do you think a democratic election to the CWC and for the post of Congress president is the answer to the woes that the party is facing?

First of all, we Congressmen must recognise that we are in decline. Ever since the communication revolution took place, elections have turned into a presidential contest. The Congress needs to discover itself. In this presidential form of election we must find answers and then decide what we need to do. If we are not able to recognise our shortcomings, then even the electoral process will not lead to the desired results. The culture of nominations must go. Elections through nominations will not lead to the desired results. Some of us put our pen to paper and said what should be done in the Congress on the road ahead. Instead of listening to us they turned their back on us. The results are for all to see.

Not that listening to us would have produced dramatic results. Results will only come with time, come with credibility, come with change in discourse, and come with a certain acceptance of our ideological positions. So even if they had listened to us, we wouldn’t have had great results. But we at least would be on the road to rejuvenating the Congress for the 2024 Lok Sabha elections.

All of us are ideologically committed to the Congress. We are as good Congressmen as any of the others. Our credentials as Congressmen cannot be doubted. We do not doubt the credentials of others. What we are saying is that every organisation needs a conversation. That means listening to others. If you stop listening to others, you will have no conversation. And in the absence of a conversation we cannot succeed in taking forward our agendas. In the absence of a serious — and I don’t say introspection because that time is over — in the absence of seriously recognising what the problem is, we will not be able to come up with any solution.

You mentioned that elections have become a presidential contest. Can you elaborate?

The nature of campaigning has changed. There is a problem also structurally… in the sense that the mainstream media is controlled by the ruling party. So we need to discover a new mechanism to reach out to the people. What is that mechanism? That needs to be thought about. We have social media platforms where the Congress is doing fairly well. But again that is not producing results on the ground. So what do we have to do to produce results on the ground?

First we have to have a conversation; with experienced minds, experienced hands, with people who understand the political realities of India, people who know what and how to articulate in the media, people who know how to get people to listen to them… We need alliances, we need to reach out to people. We cannot anymore expect people to come to us. We are not the kind of force that we used to be. We need to reach out to others by those who are experienced in this business. But in order to do that we have to have a conversation.

So coming back to that question, what do we need to do because of the communications revolution, we need to do several things at several levels — organisationally, articulation in the media in whatever form, putting up people who the people want to listen to, providing an active, thoughtful leadership who can articulate with a lot of circumspection.

We must ask ourselves what we are doing wrong and then correct ourselves. To be on a correction course, we must have a conversation with those wedded to the Congress party and experienced enough to contribute. It’s not difficult to do but it requires reaching out both within and without.

Do you think the Congress leadership is taking it as business as usual? One more defeat…

I don’t know. I am only talking about myself. I have not heard the leadership tell me anything. So I don’t know. I only hear voices which surround the leadership. That is all I know. We are yet to hear from the Congress party their views on our recent performance in Bihar and in the by-elections. Maybe they think all is well and that it should be business as usual.

In Bihar, the AIMIM won five seats. The Muslim vote too seems to be leaving the Congress.

At some stage, that party will become a spoiler. I don’t want to comment on other parties. The fact of the matter is even when we put up candidates we should do it in consultation with our alliance partners so we know who to put up and our votes don’t get polarised.

Congress is not effective opposition at the moment

A colossus who strode the political firmament for decades

BJP govt has not much to write home about

Reimagining Policy and Law in the New Normal – T K...