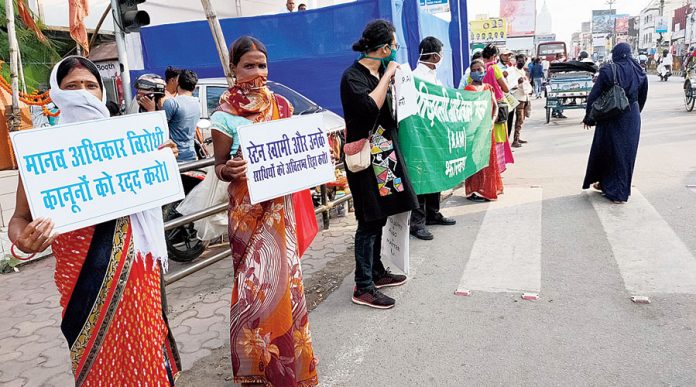 Some attributes of freedom are the most precious of all human rights. The right of an individual to express himself freely, move freely throughout the territory of India, assemble peaceably and without arms, practise any profession subject to conditions uniformly applicable to all equally placed, reside and settle in any part of the territory of India, and to form associations as prescribed by law are individual human rights that need to be protected.

What we have seen over the last six years is the State seeking freedom to curtail such rights instead of ensuring their free exercise subject to constitutional limitations. Posts on social media platforms critical of key personalities as well as actions and policies of the establishment are used as opportunities to diminish these freedoms. Till August 2019, of the 139 persons arrested in Uttar Pradesh, 76 had been detained under the National Security Act on alleged acts of cow slaughter. Cases of 11 more persons accused of cow slaughter were recommended for invocation of NSA in October. These detentions are premised on the claim that such acts may endanger State security. We have witnessed curtailment of free expression by prohibiting the flow of 2G, 3G and 4G networks in certain parts of the country on the assumption that use of such networks by some might endanger national security. On this pretext, entire populations are deprived of these networks. Significant political personalities have also been deprived of their personal liberty by invoking the Jammu and Kashmir Public Safety Act, 1978 after being kept under detention for a year under Section 144 of the Code of Criminal Procedure, 1973 and renewing such orders every three months; the rationale being that if released, their activities might negatively impact public order. We have also witnessed the travails of young students carrying out legitimate protests being prosecuted for sedition. They are accused of being part of a larger conspiracy to spread disaffection within the public, thereby destabilizing the State. Such acts are also perceived to be legitimately prosecutable under the Unlawful Activities (Prevention) Act, 1967. Some JNU students also met the same fate for their disagreement with the State and its policies.

Even more serious is the fact that those charged with the responsibility of maintaining public order let loose their biases, which have been captured on screen, encouraging the perpetrators of violence. However, those who perpetrate such violence and those encouraging them are not considered to be threats to the security of the State. It is the victims, based on their alleged acts of conspiracy, who are deemed, in the eyes of law, to be endangering the security of the State and, therefore, charged with sedition under the Indian Penal Code.

Ironically, it is the State which is now seeking the freedom to abuse the law and destroy the individuals’ constitutional protections under Article 19. It is possible to contend under the law that a particular individual has openly violated the law or is indulging in acts that are prosecutable under the UAPA or other penal statutes. But the denial of the right to freedom of expression en masse cannot have any legal basis since not all individuals residing in an area can be deemed to endanger the security of the State. Endangering the security of the State, as reflected in pronouncements of the Supreme Court, firstly requires a conspiracy to do so and, secondly, in furtherance thereof, collection and intended use of arms for the purposes of destabilizing the State. None of these acts is even attributed to individuals sought to be prosecuted under the UAPA or Section 124 of the IPC. None of the individuals detained under NSA can be charged on the presumption or fear that they might endanger the security of the State and, therefore, are required to be preventively detained.

Courts, unfortunately, have not come to terms with the desire of the State as evidenced by their mindless application of laws that endanger an individual’s constitutional rights. In fact, the acts of the State itself endanger the constitutional values enshrined under Article 19. Freedoms are meant to be nurtured, not diminished. However, we are also witnessing on our television screens a cacophonous, senseless display of verbal ‘to and fro’ seeking to destroy peace and harmony, with anchors openly targeting communities and attributing motives to create a sense of fear. Such voices, by the same yardstick, are prejudicial to the security of the State. Yet, these voices are tacitly endorsed by the State since they are not proceeded against. It is time for courts to wake up to the State’s silent support of the brewing culture of violence and the brazen misuse of laws.

What needs to be curbed is the freedom with which the State seeks to legitimize the misuse of draconian laws that impinge upon the freedom of individuals in exercising their constitutional rights. Giving legitimacy to the State to freely misapply such laws to persecute individuals will only lead to an unfree India.

Home minister’s assurances in Parliament are belied by the letter and...

The urgent need to focus on the nation’s children

Home minister’s assurances in Parliament are belied by the letter and...