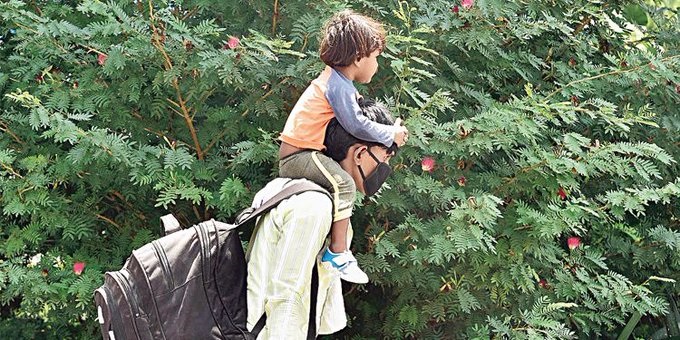 When on March 24, the prime minister announced the lockdown, he gave less than four hours for it to be implemented. For the four crore migrants who are part of the informal economy, its consequences have shaken our faith in the ability of our political system to respond to their immediate needs. That they would have to undergo the trials and tribulations of survival itself was not on the radar of a government with a myopic vision. For a law officer to tell the Supreme Court that not a single migrant is on the road when the reality was quite the opposite reflected a mindset that had distanced itself from ground realities.

We need to answer why migrants were compelled to walk hundreds of kilometres without food or transportation in their attempts to reach home. Without a job, they were denied their only means of livelihood. Their marginal earnings prior to the lockdown were not enough to help them tide over their stay at shelter homes or wherever they found a roof over their heads. With the lockdown in force along with depleting resources, they must have tried and failed to arrange for a journey across state borders. At that time, neither a rail nor a bus journey was an option. Given the appalling conditions at shelter homes, without food and basic amenities, they perhaps had no choice but to take the risk to walk homeward. Along the way, they saw an India that was different from the one prior to March 24. Our countrymen, not the government, helped them along the way in whatever way possible. Yet, some met with tragic ends. At last, the judiciary woke up to the reality of their condition and took up the matter suo motu. The law officer could no longer say that there is no migrant on the road.

The problems they face today even with Shramik Specials provided by the railways and transportation across borders are unimaginable. Most of the migrants are illiterate, and a large number are women. Reaching railway stations with already depleted resources is not easy. Social distancing is not an option. Having reached the railway station, many of them may not know how to register themselves; easy terrain for exploitation by brokers for a seat onboard the train. While they wait for the good news, nobody knows, including the government, who would take care of them.

A recent survey conducted by the Stranded Workers Action Network of eleven thousand migrant workers indicated that 89 per cent of them had not been paid by their employers during the lockdown and that 96 per cent received no food from the government. The government is not even aware of the number of migrants within the cities. Many of them may belong to different states and perhaps converse in languages that others will not be familiar with. For the government to claim that there is social distancing when the Shramik Special trains take migrant labourers to their destination is, as we know, contrary to the reality. That they are not even provided with water is clear from images we see of migrants competing to snatch water bottles on platforms. The tragedy that confronts the nation is reflected in the image of a child trying to wake up her dead mother. But the government says that all is well, that states are cooperating and everything works like clockwork orange. Dubbing those who showcase the tragedies reflected in the images on social media as vultures is evidence of the distance between those who govern and those who are governed. That only the government should be heard in a suo-motu proceeding before a court and none others is the tragic reality that shakes the confidence of the public in the attitude of a government, which chooses to be in denial.

The claim of the government of taking care of the migrants by providing them with five kilogrammes of food grains and one kg of pulses is no relief to those who are either on the road or waiting for a journey home. The call of the prime minister that we need an India that is self-reliant comes at a time when the poor cannot be self-reliant. A government which has not yet prepared a national plan of action fixing minimum standards of relief in shelter homes qua food, water, medical facilities and other basic necessities of life, in terms of its statutory obligations, is a reflection of a government that is least concerned.

At least, now the government must inform us, one, of the number of migrants who move inter-state for earning a livelihood. It was 3.62 crore as per the 2011 census. By now, this number must have increased. Two, the government must provide data, of percentage of both intra and inter-state migrants in each city. Three, the number of migrants who wish to come back home. Four, the minimum standards of provisions required for those who live in cities and are waiting to move. Five, how long do they have to wait before they can reach their destinations? Six, when in the train, depending upon the length of the journey, the provisions available to them. Seven, the data with the railways to substantiate the government’s claim that norms of social distancing are followed in the course of their journey. Eight, the provisions made for them upon reaching their destinations; arrangements made for their onward journey before reaching home, and available medical facilities during the course of their journeys.

In the absence of this information, the truth will always be compromised. The fact is that the government, which claims that all is well, has chosen to look away from the ongoing tragedy witnessed by a nation that seeks answers from our government. If the government still drags its feet, we need a National Commission to uncover the truth.