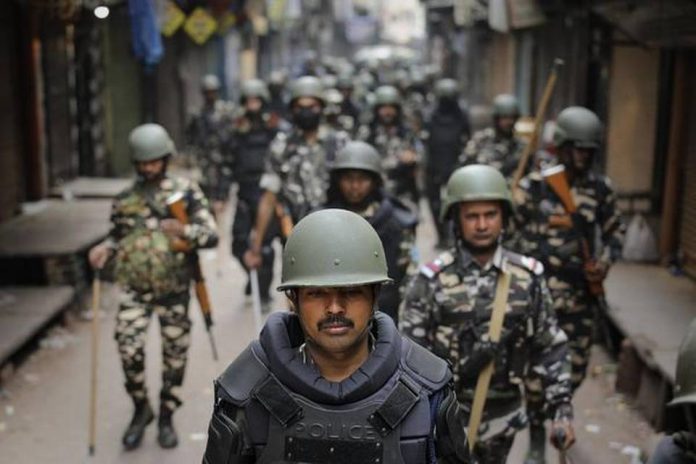 While the chemistry between U.S. President Donald Trump and Prime Minister Narendra Modi was making waves, Delhi was burning. The choreographed celebration in welcoming the President also witnessed an equally choreographed “celebration of violence”. Though the whys and wherefores of this violence are not far to seek, one fact stands out. The vicious polarisation which led to this violence happened in five of the eight seats the BJP won in the Delhi Assembly election, in north-east Delhi, where thugs ran riot. For such an event to happen under the watchful eye of a no-nonsense Home Minister speaks volumes of the complicit behaviour of several stakeholders. The Home Minister was absent while the troubleshooters were on the rampage. The Chief Minister was offering prayers and chose not to meet people who sought action. As for the Prime Minister, his swift response after 69 hours of silence was an appeal to “our brothers and sisters” to “keep calm”.

The images that were seen on social media networks will be etched in our memory for a long time to come. That policemen were seen breaking CCTV cameras to ensure that there would be no footage to rely upon while acts of violence were committed under their gaze speaks volumes of the communal virus that has crept into some elements of our police force. The image of the police goading the injured belonging to a particular community to sing the national anthem is a sign of not just police excess, but also of institutional bias. There are also recordings of calls made by scared residents to police stations and getting rebuffed.

One must ask whether the complicity of certain elements of the police force represented individual responses or there were ‘instructions from above’ that resulted in wanton dereliction of duty. The fact that in the course of this violence, the police were hardly seen protecting lives and property demonstrates that the police as bystanders watched nonchalantly the decimation of our social fabric. I dare say that this is not the first time we have witnessed the police collaborating with perpetrators of violence. It has happened earlier and, in more recent times, we have seen it happening in Uttar Pradesh.

The response of the government was no less disappointing. When Ministers of the ruling establishment and those belonging to the party in power brazenly stoke communal sentiments, the outcome is not surprising. While the Election Commission chose to place an embargo on some of those who spoke to polarise, it also chose not to register FIRs. The words uttered in the course of such speeches are actionable. Section 153A of the Indian Penal Code makes it an offence if by words, spoken or otherwise, attempts are made to promote, on grounds of religion, disharmony, feelings of enmity, hatred or ill-will between different religions, or acts are committed which are prejudicial to maintenance of harmony between different religions — such activity can be met with imprisonment up to three years. The motivation and intent of those utterances could not be doubted. Yet, the Home Minister, the Commissioner of Police and the entire police force chose to turn a blind eye.

Are we then to believe that the government and the police force were acting in tandem? If true — and the pattern seems to be replicated from time to time in various parts of the country — the seriousness of the situation cannot just be brushed aside.

Judiciary did not act

The judiciary has also not responded with alacrity and the kind of sensitivity expected of it. There was a time when it would have suo motu taken up the issue and ensured that engineered violence of this kind was dealt with expeditiously. In an age when the social media is replete with images that act as evidence, the courts could easily have taken up the matter, asked for a response overnight and ensured that possible acts of violence were nipped in the bud. Nothing prevented the judiciary from suo motu taking action for the kind of speeches that were made with the intent to incite.

When the executive is aware that the judiciary is ready to protect our citizens, it will hesitate to let things slide. But if judges who seek accountability are transferred in the midst of a hearing, the executive will be emboldened. The arrogance of the executive must never be allowed to come in the way of protecting the lives of our people.

One silver lining in this saga of despair is the fact that there are stories of communities protecting each other. This only shows that the common man wants peace and the social fabric of this country has not yet fallen apart. The scars and wounds perpetrated by violence need a healing touch. Those who have fallen from grace must pause and reflect.