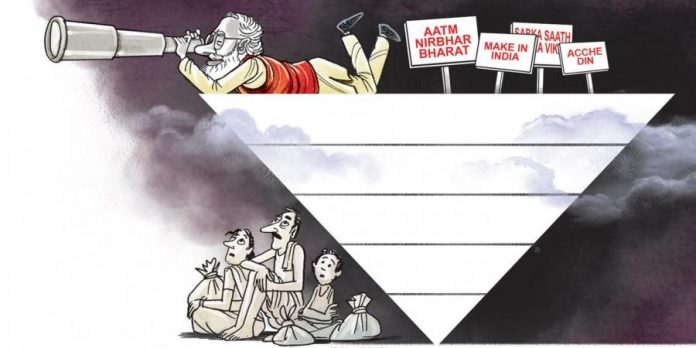 The PM recently spoke about achieving self-reliance in sectors like defence, chip manufacturing and aviation. In the absence of any plan, this is self-delusion

On 11 June 2020, Prime Minister Narendra Modi exhorted the Kolkata-based Indian Chamber of Commerce to convert the pandemic-related economic crisis into an opportunity. For the PM to address the Kolkata-based industry lobby instead of other apex chambers of commerce to deliver this message to industries around the country was somewhat surprising. He perhaps chose Kolkata because of the impending state Assembly elections in early 2021. This was yet another speech without a road map in place. He talked about taking the Indian economy from “command-and-control” mode to “plug-and-play”. He exhorted the industry to take bold decisions and make bold investments going forward. He spoke of a self-reliant India in sectors like medical devices, defence, coal and minerals, edible oil, fertilisers, electronics, solar panels, batteries, chip manufacturing and aviation.

The PM, before making such an exhortation, should have been and hopefully is aware of a possible economic pandemic. Any economy that has self-reliance as its goal must commit itself to make policy shifts and invest heavily in research and development (R&D). India’s gross national expenditure on R&D is 0.7% of GDP, lowest even among BRICS countries. Amongst developed economies, Israel spends 4.4%, Germany 3%, the US 2.8% and Canada 1.6% of their GDP on R&D. The share of expenditure in higher education is merely 3.8% of the gross R&D expenditure, whereas it is 7% in China, 13% in the US, 17% in Germany, 21% in France, 31% in Australia and 41% in Canada.

The foundation of a nation’s wealth lies in unleashing the innovative spirit of young minds who seek to explore and discover new ways to overcome the challenges that lie ahead. It is funding and freedom to experiment and discover through multi-disciplinary collaborations that will help lay the foundations of a self-reliant India. In the last six years, the Modi administration has shown no interest in moving in that direction. There is no point asking industry to be innovative. Factories produce goods. They use existing technology. They do not innovate. Talking of medical devices, the PM knows that 70% to 90% of our domestic requirement for medical devices is met through imports. We lack a robust indigenous ecosystem for large-scale manufacture of medical devices.

In respect of solar panels, the Indian solar power sector itself imports solar modules. In 2018 alone, these imports cost us $2.59 billion. We import $60 billion worth of electronic equipment, assemblies, components, raw material, etc. Around 88% of the components used by the mobile handset industry are imported from countries like China. We are not self-reliant in fertilisers, a key input towards achieving self-sufficiency in food grains. At present, India imports two-thirds of its requirement for fertilisers. Similarly, we are the world’s leading vegetable oil importer of which the share of palm oil imports is more than 60%. Despite having the fourth largest coal reserves in the world, our coal imports have been rising to meet growing demand. We imported 247.1 million tonnes (MT) of coal in 2019-20, about 5% higher than the 235.35 MT imported during 2018-19.

Though the government has opened up commercial mining to the private sector, commercial coal mining projects have long gestation periods, and thus unlikely to support the power sector in the near future. If we look at our telecom sector, there is hardly any device that is manufactured in India. The 4G equipment used by Reliance Jio is supplied by Samsung while the same equipment used by Airtel and Vodafone is supplied by Huawei. Given these facts, it is difficult to digest that the PM genuinely believes that industry will help India become self-reliant. Surprisingly, the PM talked about chip manufacturing. For years, we have tried to set up a semiconductor wafer fabrication (FAB) unit in India.

We lost out to Vietnam since we were unwilling to extend concessions and tax rebates that the investors demanded. Upfront investments are huge and the gestation period for manufacturing semiconductors is long. In the last six years, I am not aware of any attempts made by this government to attract foreign investment in a FAB unit. The aviation sector the PM talked about is in the doldrums. With Air India up for sale, there is little room for plug-and-play. If self-reliance is an imperative, there was no need to buy Rafale aircraft off the shelf rejecting manufacture by state-owned HAL. The ‘Make in India’ slogan remains a chimera given that globally we are the second largest importer of defence equipment.

In the near term to achieve self-reliance in these sectors, given the lay of the land, is an act of self-delusion. The PM has no well-thought-out road map for it. Self-reliance as a policy prescription in a highly interconnected world is a throwback to the import substitution policy that was given up long ago. Under that policy, Indian consumers were short-changed by the monopolistic regime of over-priced consumer goods of poor quality. We are likely to run into an economic recession. In times like these, what we need is to take care of those at the bottom of the pyramid. With unemployment reaching unprecedented levels, industrial production falling to a new low, along with plummeting demand, the dream of a self-reliant India will fall apart. It will meet the same fate as other slogans, meant only to seduce the public in the false belief that PM Modi cares.

Politics is at the forefront of all such slogans, both in terms of their articulation and the place of articulation. With S&P global (BBB-), Moody’s (BAA3) and Fitch (BBB-) downgrading India’s rating at the lowest investment grade, World Bank projecting Asia’s third largest economy to shrink by 3.2% during the year and OECD projecting that the Indian economy may contract by 3.7%—or in the case of a second wave of Covid infections, decline by 7.3% in 2020-21—it is time to think of self-reliance in terms of protecting ourselves from the consequences of the pandemic. I hope “Aatm Nirbhar Bharat”—the latest of many superfluous campaigns—does not mean that the government has given up and left us to be self-reliant in our tryst with survival. The time has come for the PM to talk of the challenges facing the country today instead of mouthing slogans and selling dreams.