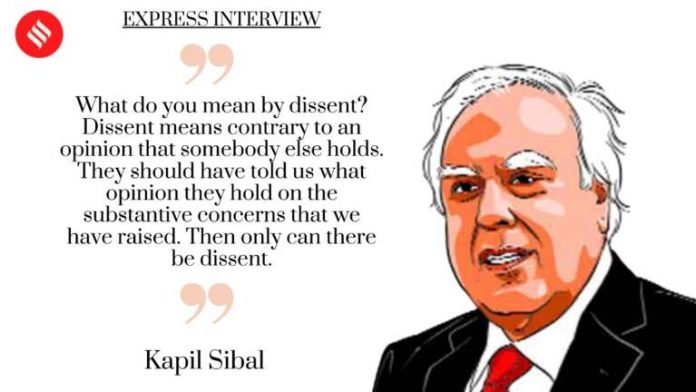 Kapil Sibal, one of the 23 signatories of the recent letter to Congress chief Sonia Gandhi that called for sweeping changes in the party, speaks about the letter, the leaders who wrote it, the CWC meet that ignored it, and the future.

Kapil Sibal, Rajya Sabha member, senior Congress leader and one of the 23 signatories of the recent letter to party chief Sonia Gandhi that called for sweeping changes, speaks with The Indian Express about the letter, the leaders who wrote it, the CWC meet that ignored it, and the future. Excerpts:

It has been three weeks since your letter to Congress president Sonia Gandhi. But there seems to be no visible signs of her having accepted any of your suggestions.

Politics is not about day following night. Politics is about chartering a course of action with certain objectives in mind. Where are we coming from? One, we believe that the legacy of the Congress and its historic role needs to be preserved and that we must move forward consistent with those values that Congressmen embraced during the course of the freedom struggle. That is the ideological aspect.

Second, politics is about change. We cannot be stuck in the past. We need to embrace the present. So we must understand the present, and in that context the mood of the people. We must understand what the public wants and our policies and strategies must be in tandem with that. The third part is that politics in this country – I don’t talk of any particular party – is based now primarily on loyalty. We need what is called loyalty-plus. What is that plus? That plus is merit, inclusiveness, commitment to the cause; that plus is about being able to listen and to have a dialogue. This is what politics should be.

Therefore, when you start suspecting people’s motives, then naturally misunderstandings develop. I am reminded of a poem by Gulzar: dooriyan jab badhne lagi toh galatfaimiyan bhi badhne lagi, phir usne wahi suna jo maine nahin kaha (when distances grow, so does misunderstandings; and then s/he listens exactly what I didn’t day). This is what happens when distance becomes a mode of action and every move is viewed with suspicion.

But if you don’t talk of substance and talk of either timing or the fact that we wrote, that itself is an example of distancing yourself from the cause. And that is what has happened. Not one request of ours, concern of ours reflected in the letter has been sought to be addressed in that [CWC] meeting – not one. Yet we are called dissenters.

What do you mean by dissent? Dissent means contrary to an opinion that somebody else holds. They should have told us what opinion they hold on the substantive concerns that we have raised. Then only can there be dissent.

Can anybody oppose the fact that we should have a whole-time, 24×7 president of the party? Either they should say they don’t want it – then there will be dissent – but they also agree with it. We haven’t had a whole-time president since July 3, 2019…

Does the Congress party believe there should not be a whole-time president, that we should not have elections? All the concerns that we have placed before the party…if they do not agree then only, we are dissenters. The fact is we are at a historic low. Do they disagree with that?….This whole question of dissenters is completely unacceptable.

What is it that we want from the BJP? We say that you [BJP] are not following our Constitution. You have destroyed the foundations of democracy, inclusiveness of India. Our main rival is BJP. We are the ones attacking [PM Narendra] Modi on destroying the very fundamentals of democracy by not adhering to the Constitution…. We want adherence to our (party’s) constitution. Who can object to that? We say that our constitution should prevail (in the party) just as the Indian Constitution should prevail and [PM Narendra] Modi should function in the context of that. What is wrong with that?…Our concerns are on principles. None of us want a post. I, for one, personally say that even if they offer it, I will not take, because they consider me as if I am a dissenter. How can I be? I have given 30 years of my life for this party. In 30 years, they haven’t given me a post. Have I complained?

You were made an MP, a Union minister.

I have been given (election) tickets and I have won, and I have been given tickets and have lost. So that is neither here and nor there. I was given a ticket by P V Narasimha Rao in 1996. And thanks to Lalu-ji (Lalu Prasad) and Mrs (Sonia) Gandhi in 2004 – because we didn’t have enough votes in Bihar to bring anybody to Rajya Sabha – it is because of Lalu and my request to Mrs Gandhi to let me be a candidate…she was very kind. I am grateful to the party, which is why we are defending the party at every forum.

You said the contents of the letter were not discussed….

More than that, in the course of the meeting we were called traitors and nobody sitting in that meeting, including the leadership, told them that this is not the kind of language that [traitors use]….Our letter was completely…every part of it was expressed in very civilised language. How could anybody call us a traitor? That we are inimical to the party…that we are cruel?

Who are we cruel to? All kinds of epithets were used?

What is your next step. What are you waiting for?

We are just hoping that the party will address those concerns.

I don’t know. I can’t be giving time-lines to the party.

How long are you prepared to wait?

It is not a question of how long. We need the concerns to be addressed as soon as possible. I am sure the party will address them.

But you have not been able to mobilise support besides these 23 leaders.

I don’t know about that. I don’t think we should even talk about those things. We are not against anybody. I think people across the country – whether they belong to the Congress or not – and you have seen articles in the media…they all express appreciation for our concerns. So obviously there is a public sentiment which appreciates our desire to rejuvenate the Congress.

Within the Congress, we have not seen a single Congress leader standing up in your support.

Even Shashi Tharoor, one of the signatories, has said that ‘let’s end the debate’.

Because he is expecting the concerns to be addressed as quickly as possible. There is no contradiction in that.

The sense which we are getting from the leadership is that a committee, as some of you were saying, may not be set up.

Nothing happens in a day in any political party. I don’t know what sense you are getting from where. Remember: these 23 [leaders] are not isolated individuals. We all have roots in the society. Many of them are forces to be reckoned with on their own. And they have a pan-India presence, literally from Kashmir to Kanyakumari…. I don’t think anybody should think this is something that we have done to belittle anybody, and to hurt anybody.

If they think like that…they will be hurting the future of the Congress party itself.

You mentioned about loyalty-plus. In the Congress, when you think about loyalty it is all about the Gandhi family.

I talked about politics in general. I don’t want to talk about Congress party. That is true of other parties (as well). Within the Congress, people have a great regard for the family for their contributions. Nobody can dispute that. We also have said it in the document that we greatly appreciated the services the Gandhi family has rendered…but that does not mean our concerns are meaningless.

Ghulam Nabi Azad in an interview to The Indian Express said he has no problem with whosoever becomes the party president through an election. So, if tomorrow Rahul Gandhi contests the elections and wins, what is the debate then?

Many believe this concern arose because of a particular style of leadership.

Do you foresee a contest for the post of Congress president?

I don’t know. It all depends. I cannot predict the future.

Among the 23, are any of you prepared to contest?

That is personalising the issue. I don’t want to do that. At the moment we want to revive and strengthen the party.

The movement that you have started…

It is not a movement…. It is the concerns of certain representatives of the party which need to be constructively addressed by the Congress at the highest level.

…My question was that it seems to have finished even before it started. The CWC did not even discuss it.

Why do you say that? I wish it had been disclosed and discussed. The people should know what the letter said. There should be no hesitation. But to say it is finished is like the electronic media coming to conclusion before a debate. In politics, day doesn’t follow night. Things don’t happen in a day.

In the next six months, the AICC session will take place and most probably there will be elections for the post of Congress president and Rahul Gandhi will contest. How do you see his leadership?

Again, we are jumping the gun. Let the process start. Let’s see who wants to do what. But before that, our concerns have to be addressed.

How, and in which fashion?

I am sure the Congress hierarchy would know if they wished to address them. I hope they do. Which fashion only they will tell us, if at all.

What if they don’t address it?

Are you all prepared to resign?

You cannot persuade me to give answers to these questions in this fashion. I will not say anything because that is not the issue. Supposing I were to resign from Rajya Sabha, personally, that seat will go to the BJP…it won’t come to the Congress. If, however, they think that I am a dissenter and I am working against A, B or C..if they ask me to resign, I will resign tomorrow. I will never in my life join another party or embrace another ideology.

The India we are living in today